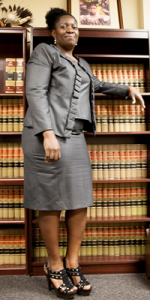 Pamela D. Kigham is an attorney with Fondungallah and Kigham, LLC. She was admitted to practice Law in the State of Minnesota in October 2004. Ms Kigham was a Law Clerk at the Fondungallah Law Offices from 2003 to 2004, while attending William Mitchell College of Law.

She practices in the areas Family Law, U.S. Immigration & Nationality Law and Landlord/Tenants. Pamela Kigham studied law and received a bachelor’s Degree in law in 1993 from the University of Yaoundé In Cameroon. She enrolled in the Paralegal Program at El Centro Community College in Dallas, Texas in 1998 and was inducted into the Phi Theta Kappa Society in 2001. Ms. Kigham attended William Mitchell College of Law and received a J.D in June, 2004. She was admitted into the Minnesota Bar in October 2004. She also completed the Guardian Ad Litem program in 2005 and is currently a certified Guardian Ad Litem.